As a junior, Dominic averaged 22 points, 6.3 rebounds and 5.1 assists per game. Dominic was the state's leading scorer in 2005 averaging 31.1 points per game. He also averaged 7.1 rebounds, 6.4 assists and 3.9 steals, each of which ranked him among the top two in Indiana's North Central Conference. He led Richmond to the sectional final and an 18-4 record, the school's best in 12 years. He scored 49 points in a game during his senior season to break the school's 97-year old single game scoring record. James was rated #31 by Hoopmasters.com following his senior season and averaged 11.6 points and 4.4 assists as a member of the silver medal-winning 2004 USA Basketball Men's Youth Development Festival North Team.

Claimed MU's “Create For Others” Award and Dwyane Wade Legacy of Leadership Award … ranks second all-time in games played (129) and assists (632), third in points (1,749) and fourth in steals (238) … Was one of 50 players named to the John R. Wooden Award watch list and earned Preseason BIG EAST Honorable Mention … One of 17 finalist for Bob Cousy Award … Named to the Naismith Trophy watch list … Is one of three players with more than 600 career assists at MU … Matched a career high with six steals and had five assists in season opener vs. Houston Baptist (11/14) … Recorded eight points, four rebounds, one block and a steal vs. Chicago State (11/17) … Posted 16 points and eight assists, both season highs, and had a game-high three steals vs. Milwaukee (11/22) … Matched a season-high with four rebounds and scored 11 points with three steals vs. Texas Southern (11/25) … Tallied a season-high 19 points and seven rebounds, in addition to eight assists vs. Dayton (11/29) … Scored 15 points, dished out five assists and matched a season-high with seven boards vs. Central Michigan (12/2) … Scored in double figures for the third straight game by chipping in 10 points in a 61-58 win over Wisconsin (12/6) … One of four MU players scoring in double figures with 10 points and five assists vs. IPFW (12/13) … Handed out five assists and two of his three field goals were from 3-point range vs. Tennessee (12/16) … Posted a game-high six assists vs. Western Carolina (12/19) … Knocked down three 3-pointers in the second half, including the game-winner with 0.4 seconds remaining, to lead MU to a 68-65 win at NC State (12/22); finished with 18 points with six assists, four rebounds and a season-high seven field goals and 4-of-6 shooting beyond the arc … Four of his six baskets from from 3-point range and he finished with 17 points and six rebounds vs. Villanova (1/1) … Posted nine points and four assists without a turnover vs. Cincinnati (1/4) … Was 7-of-13 from the field and finished with 15 points and six assists at Rutgers (1/7) … Netted a season-high eight field goals in 40 minutes of action and finished with 17 points, seven assists and three steals vs. West Virginia (1/10) … Recorded a season-high nine assists, all in the first half, and tallied three steals vs. DePaul (1/24) … Finished with 15 points, five assists and a team- and season-high nine rebounds at Notre Dame (1/26) … Contributed 15 points, five assists and four steals at DePaul (2/3) … Recorded 11 points, six rebounds and a game-high three steals at USF (2/6/) … Handed out a game-high nine assists, matching previous high mark for the season, and added 14 points at Villanova (2/10) … Finished with 14 points, six assists and three steals vs. St. John's (2/14) … Posted career highs in steals (7) and blocks (4) to go along with 13 points, eight assists and six rebounds vs. Seton Hall (2/17) … Had a game-high four steals and played all 40 minutes at Georgetown (2/21) … Suffered a broken left foot in the opening minutes vs. UConn (2/25) and it was announced he would miss remainder of the season … Missed the next six games, but a quick recovery allowed James to play 17 minutes vs. Missouri 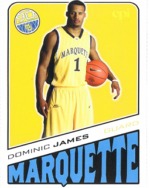 Dominic received a slew of preseason honors from the BIG EAST, Rivals.com, the John R. Wooden Award Preseason Top 50, Collegehoops.net, the Naismith Award and Bob Cousy Award. He was also named to BIG EAST Weekly Honor Roll on November 27th and was named BIG EAST Player of the Week twice. He had 13 points and four assists against Hillsdale on November 10th and scored 37 points and had eight assists in two games of the Milwaukee Region of the CBE Classic. He led the team with 17 points against Eastern Michigan on November 18th, 16 points vs Texas Tech on November 20th and 25 points in the win over Duke on November 21st, en route to BIG EAST Honor Roll mention and CollegeInsider.com's Player of the Week honors. He had a season-high seven assists in the Duke win, accounting for 16 of MU's 25 field goals. Dominic led the team with 22 points, half coming on a career high 11 made free throws at Valparaiso on November 27th. He recorded 19 points, five rebounds and six assists against Northwestern State on December 1st and was 5-for-7 from the field, scoring 13 points vs. Delaware State on December 5th.

Dominic was one of three Marquette players to start in every game this season. He was a six-time BIG EAST Rookie of the Week honoree and set a freshman season scoring record 473 points, topping Doc Rivers mark that stood for 25 seasons. He was second on the team in scoring, with 15.3 points per game, 13th in the BIG EAST and the leading freshman scorer in the BIG EAST. James was second on the team with fellow freshman, Jerel McNeal in rebounds, averaging 4.5 per game. He made 43.1% of his attempts from the field in the regular season, a number that put him above all freshmen in the BIG EAST and 13th among all BIG EAST players. James dished out 167 assists, ranking him third overall in the conference and the top freshman. Nationally, he ranked 29th in the nation in assists, the fourth-highest freshman total and second on the MU freshman season assists list with 167 (Tony Miller had 221 in 1991-92).

James scored a team-high 16 points in his career debut in MU's win over Rice on November 18th. He also logged nine assists in the win over the Owls. He played 37 minutes and scored 15 points against Winthrop on November 19th, earning BIG EAST Rookie of the Week honors on November 21st. Dominic scored 41 points in three games at the Great Alaskan Shootout and matched a career-high nine assists against South Carolina on November 26th. He scored a team-high 22 points at Nebraska on November 30th and grabbed a season-high five steals against South Dakota State on December 3rd. James converted seven of 17 attempts from the field, scoring 17 points against Oakland on December 19th and was one of three MU players to score in double figures against Delaware State on December 22nd, when he recorded 10 points. He led all scorers with 22 points against Lewis on December 28th and dished out seven assists for the second consecutive game against # 2 Connecticut on January 3rd.

Dominic recorded ten games of seven or more assists, with MU going 7-3 in those contests. He scored a team-leading 18 points against Cincinnati on January 7th and was the only Golden Eagle to be perfect from the charity stripe, converting all four of his attempts against the Bearcats. James had 14 first half points, the second time in as many games and third time this season that an MU player has had 14 by halftime. He sunk 10 of his attempts from the floor for another career best at West Virginia on January 14th, scoring a career-best 28 points, earning his second BIG EAST Player of the Week honor. He topped his previous career high with a team-leading 29 points at DePaul on January 17th, with 17 of his points coming in the first half in 16 minutes. James also recorded a career-high 17 field goal attempts in that contest, earning back-to-back BIG EAST Rookie of the Week honors after averaging 20.0 points, 5.0 rebounds, 4.5 assists and 3.0 steals.

He recorded 11 points, a team-high six assists, five rebounds and one block and a steal against Notre Dame on January 20th. He had seven or more assists for the 10th time against DePaul. It was the eighth time this year that he combined seven or more assists with 10 or more points. He led Marquette with 16 points, six rebounds and four steals at Pittsburgh on January 28th and his 16 points (14 in the second half) against Saint John's on February 1st helped earn his fourth BIG EAST Rookie of the Week honor after recording 22 points, five rebounds, three assists and two steals at Rutgers on February 12th. He tallied his fifth Rookie of the Week honor on February 20th, after scoring 16 points per game, and averaging 5.5 assists and two steals in wins over ranked teams. His 18 points at Notre Dame on February 25th gave him his 13th straight game of 10 or more points, 25th for the season. James notched his first double double of the season at Louisville on March 1st, with 16 points and a team-leading 11 boards. He hit the buzzer-beating three-pointer to send the game at Louisville into overtime and tied his career-high with nine assists against Providence on March 4th. He was named BIG EAST Rookie of the Week for the sixth time on March 6th, following his performances at Louisville and against Providence.

Dominic is the son of Angela James and Greg Wright. He has two brothers, Germayne, who played college basketball at Lakeland College in Wisconsin, and Donovan. He also has two sisters, Alexis and Shantae. The person he most admires is his grandmother Priscilla Tillie Bowen. He is a public relations major. 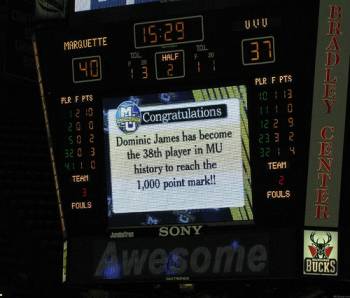