Jerel led Hillcrest to the sectional final during his senior season by averaging 20 points, nine rebounds, six steals and four assists. He was ranked as the state of Illinois' top senior by the Illinois Prep Bullseye and played for the East Squad in the 2005 Roundball Classic held at the United Center in Chicago.

Jerel was one of three Marquette players to start in every game this season, averaging 11.1 points per game, good for third on the team. He was second on the team in rebounding with 4.5 boards per game. McNeal led the team in steals with 64 and passed Doc Rivers for the freshman season steals record. When McNeal scored 10 or more points, Marquette was 14-7. He scored 14 points in collegiate debut, shooting 5-of-7 from the floor against Rice on November 18th. He also grabbed 10 rebounds in the first two games to lead the team in that category. He scored 30 points, including 15 points against Eastern Washington on November 23rd and 12 rebounds in three games in the Great Alaskan Shootout. Jerel converted all nine of his free throw attempts in three games. He was perfect from the free throw line for the fourth consecutive game making all five of his attepmts at Nebraska on November 30th.

Jerel scored a team-high 12 points against Valparaiso on December 7th, his first double-figure scoring performance since Eastern Washington and he topped his previous career best of 15 points with 18 against Oakland on December 19th. He scored 14 of his 18 points in the first half, setting a season best for a Marquette individual. Jerel also grabbed seven rebounds and dished five assists in that contest. He was one of three players to score in double figures contributing 10 points against Delaware State on December 22nd and scored in double figures for the fourth consecutive game with 11 points against Lewis on December 28th.

McNeal recorded a career night against #2 Connecticut on January 3rd, with his first career double double, topping his previous career highs with 19 points and 12 rebounds (eight of those boards came in the first half). He also topped his career-high field goal attempts against Connecticut with 22. Jerel contributed 16 points against Cincinnati on January 7th and played a season-high 37 minutes at Seton Hall on January 11th. He was one of four Marquette players to score in double figures, posting 11 points at DePaul on January 17th. He topped his career high of five assists with seven in that game. He accounted for three of Marquette's season-high 10 blocks against Notre Dame on January 20th. That was a career-high, as were his five steals, topping his previous mark of four against South Dakota State. 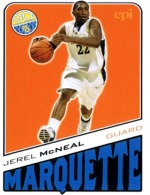 Jerel played 35 minutes, making 7 of 22 field goal attempts and 5 of 7 free throws, for a team-high 19 points against Hillsdale on November 10th (he also grabbed a team-high seven boards). McNeal set a CBE Classic record with six steals against Idaho State on November 13th, a record he later tied against Duke on November 21st. He scored 19 points against Texas Tech and 17 against Duke and was named the BIG EAST Player of the Week for those efforts. He tallied 10 points in victory over Valparaiso on November 27th and had 13 points against Northwestern State on Decemberr 1st. He scored a team-high 16 points, going 8 for 17 from the field, and set a career-high with seven steals vs. North Dakota State on December 2nd. He scored a game-high 16 points, had four assists and four steals in win over Delaware State on December 5th. He went 6 for 11 from the field and connected on 4 of 6 shots from the line for 16 points, five rebounds and a team-best four assists vs. UW-Madison on December 9th.

McNeal scored 15 points, including a career-best nine from beyond the arc, vs. UMBC on December 16th. He was six of nine from the floor, five of seven from the line and scored 17 points along with six steals, five rebounds and four assists against Oakland on December 19th. He scored a career-high 25 points and had seven assists against Morgan State on December 22nd and after missing one game with a concussion, he returned to lead the team with 16 points and five steals vs. Syracuse on January 7th. he connected on nine of 13 attempts from the free throw line en route to scoring a team-high 19 points at Connecticut on January 10th and in 25 minutes vs. West Virginia on January 13th, he scored 11 points, grabbed nine rebounds and had seven assists. McNeal had seven assists and scored 15 points against Louisville on January 15th and recorded his first double-double of the season, tallying a career-high 10 assists while scoring 22 points against Seton Hall on January 24th (he also grabbed seven rebounds and had four steals).

Jerel tallied 13 points, including a game-winning layup with no time remaining on the clock against USF on January 28th and recorded his second double-double of his career, scoring 18 points and matching a career-high with 12 rebounds against Providence on February 3rd. He scored 16 points at DePaul on February 14th and tallied a game-high 18 points (matching a career-high for threes made in a game (3) and minutes played (37) against Louisville on February 17th. McNeal scored 15 points and had seven rebounds against Villanova on February 19th and went 8 for 11 from the free throw line, scoring 16 points against Notre Dame on February 24th.

Associated Press Second Team All-America selection … named MU's most valuable player … also claimed the Golden Eagle Toughness Award … ranks first all-time at Marquette in points (1,985), steals (287) and games played (130) … First Team All-BIG EAST selection …. Tabbed first team All-American by Jeff Goodman of Foxsports.com and second team All-American by Sporting News … One of 24 players named as a finalist for the John R. Wooden Award … One of 10 finalists for the Lowe's Senior Class Award … Named to the Naismith Trophy watch list … 2009 Oscar Robertson Trophy finalist … Selected as USBWA District 5 Player of the Year and was a first team All-District 5 selection … Named to NABC District 5 first team … Earned Preseason All-BIG EAST honors … Became sixth player in MU history to tally over 1,500 points and 500 rebounds … Tallied 20 points and five assists vs. Houston Baptist (11/14) … Netted 17 points with six assists vs. Chicago State (11/17) … Recorded 22 points and five steals vs. Milwaukee (11/22) … Hit four 3-pointers and finished with 20 points, five assists, four steals and a season-high eight rebounds vs. Texas Southern (11/25) … Tallied 16 points and six rebounds vs. Dayton (11/29) … Named to the Chicago Invitational all-tournament team after averaging 16.5 points and 5.3 rebounds per game, in addition to 17 assists and eight steals in four games … Finished with 14 points and five asssits vs. Central Michigan (12/2) … Shot 55.6 percent (10-of-18) from the field and netted 19 of his 26 points in the second half in a 61-58 win over Wisconsin; scored 14 straight points in the second half for MU and finished with seven boards … Garnered his first BIG EAST Player of the Week nod of the season on Dec. 8 … Added 16 points vs. IPFW (12/13) … Made five three-pointers and finished with 19 points, five rebounds and five assists vs. Western Carolina (12/19) … Scored a team-high 20 points with four steals and two blocks vs. NC State (12/22) … Handed out seven assists and scored a game-high 24 points to lead MU past Villnova (1/1/09) … Scored a game-high 26 points on 9-of-10 shooting from the field, including 7-of-7 (100.0 percent) from beyond the arc to set a new MU record for single-game 3-point percentage vs. Cincinnati (1/4) Named BIG EAST Player of the Week on Jan. 5 … Notched 14 of his 16 points in the second half, while going 7-of-8 from the foul line vs. Rutgers (1/7) … Scored a game-high 26 points vs. West Virginia (1/10), in addition to seven rebounds and three steals while playing all 40 minutes … Chipped in 25 points and six assists vs. Providence (1/17) … Tallied a game-high 21 points and season-high six steals vs. DePaul (1/24) … Poured in a team- and personal season-high 27 points at Notre Dame (1/26) … Notched his first double-double of the season with 26 points and 11 assists – both game highs – and added six rebounds, five steals and three blocks vs. Georgetown (1/31) … Named BIG EAST Player of the Week for the third time this season on Feb. 2 … Scored 26 points and recorded six assists, five steals and a career-high four blocks at DePaul (2/3) … Scored a game-high 22 points at USF (2/6) … Netted a team-high 23 points with seven assists at Villanova (2/10); passed George Thompson on MU's all-time scoring list with his 3-pointer at the 6:12 mark of the second half vs. VU … Registered 20 points, seven rebounds, seven assists and five steals vs. St. John's (2/14) … Had 13 points, seven assists, six rebounds and five steals vs. Seton Hall (2/17) … Posted 22 points, six rebounds and a game-high seven assists at Georgetown (2/21) … Netted 21 points in the second half vs. UConn (2/5) and settled for a team-high 26 points … Scored a game-high 23 points at Pittsburgh (3/4) … Tallied a game-high 25 points vs. Syracuse (3/7) … Had a game-high four assists and added 11 points vs. St. John's (3/11) … Scored 15 points with a team-high five assists vs. Villanova (3/12) … Went 7-of-9 from the foul line and finished with 14 points vs. Utah State (3/20) … Matched a caeer high with 30 points vs. Missouri (3/22) while shooting 13-of-15 from the foul line, setting new personal highs in free throws attempted and free throws made; also tallied five rebounds and game-high four assists against the Tigers … earned fourth letter. 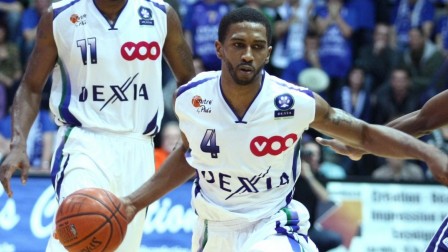 He signed to play overseas for Dexia Mons-Hainaut of the Ethias League in November of 2009. But after reports of testing positive for cannabis by the Association Wallonia-Brussels de Basketball Basketball (AWBB), Jerel was suspended for 15 days; it was extended across FIBA. In April 2010, he reached an agreement to end the contract. 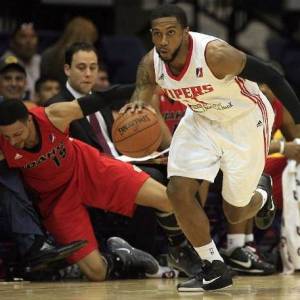 In what could have been a precursory move to send him to their NBADL affiliate, the Houston Rockets added Jerel McNeal to their roster late in the pre-season.

As a member of the 2010-11 Rio Grande Valley Vipers, Jerel was the second Marquette player to suit up for the team - Steve Novak having been the other. He started in all 47 regular-season games for the Vipers and was top 5 in the following statistical categories: 34.4 minutes per game (tied for 4th), 194 ppg (2nd), and 4.4 apg (3rd). Rio Grande finished second, with a 33-17 record, in the West Conference and earned a #3 seed in the NBADL playoffs. He was held under double-figure scoring only five times in the season.

On March 8, 2011, McNeal was called up from the NBA Development league and signed to a 10 day contract by the New Orleans Hornets, however he didn't see any time during his 10-day stint.

Jerel turned it on during the playoffs, leading his team in the top three statistical categories: points per game (27.6), assists per game (6.5), rebounds per game (7.0). The Vipers downed Bakersfield in a best of three series (2-1), then swept Reno (2-0). After losing the first game of the NBADL Finals to the #1 seed from the East, Iowa Energy, and facing possible elimination in Game 2, McNeal carried his team with a game-high 37 points, adding nine rebounds and eight assists in front of a record crowd of 14,036 at Wells Fargo Arena.

Also, he was chosen as a 2011 NBA D-League All-Star, replacing an injured Viper teammate, Mustafa Shakur. In about 20 minutes of action, he was 1-4 from the field (1-1 from 3pt) with 3 rebounds and 2 assists. He had been selected to participate in the NBADL All-Star Shooting Stars Competition, which featured four teams of three in a two-round timed shooting event. 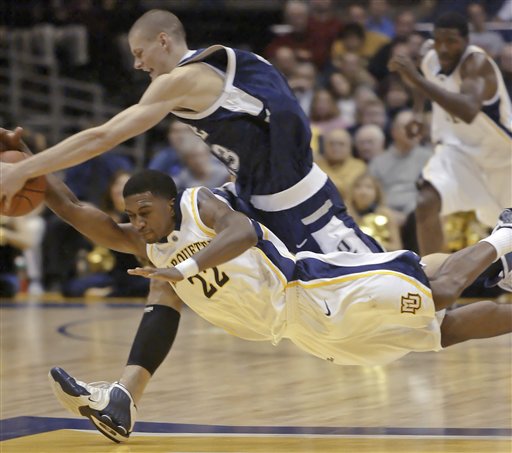