Marquette's 73-61 season-opening victory over Villanova in the Coaches vs. Cancer Classic in Madison Square Garden on Friday night left both coaches with plenty of work to do. 'The great news is we got a win,' Marquette's Tom Crean said. 'The great news for me as a coach is I have a lot of things to work on.'

Start with Villanova's 31 offensive rebounds, a statistic that could have been disastrous had the Wildcats shot better than 30 percent from the floor.

'I'm not sure I've ever been with a team that gave up 31 offensive rebounds,' Crean said.

Villanova could not do much with that edge. The Wildcats' shooting was erratic all night. On one second-half sequence, they missed five shots, rebounding each one and missing each follow-up.

They missed their first 20 3-point attempts, many of them with air balls, and finished just 3-for-26 beyond the arc. Contrast that with the shower of six 3-pointers Marquette (No. 19 ESPN/USA Today; No. 18 Associated Press) used at the end of the first half to build a lead that ballooned to as many as 20 points.

'We didn't make shots,' Villanova coach Jay Wright said. 'Give their defense credit, too. The way they defend, they really protect the 3-pointer.' That is by design, Crean said. 'We take a lot of pride in defending the 3-point line,' he said. 'For us to be a good team, we have to challenge 3-point shooters.'

Dwyane Wade led the Golden Eagles with 17 points, including an alley-oop basket with eight minutes left that was the game's most spectacular play. He also played 33 minutes without a turnover.

The Wildcats started freshmen Randy Foye and Allan Ray in the backcourt, and Ray missed six of seven shots in the first half but finished as Villanova's leading scorer with 16. Andrew Sullivan and Jason Fraser had 13 each.

Marquette, playing in the Garden for the first time since 1995, raced to an 11-2 lead on the shooting of senior transfer Robert Jackson and Scott Merritt. Then Marquette hit six 3-pointers, three of them by Travis Diener. Jackson had 15 points and Diener 12.

Joe Chapman, Merritt and Steve Novak had the other 3-pointers, as six of Marquette's last seven first-half baskets came from beyond the arc.

Villanova struggled through a miserable shooting first half, making just eight of 29 attempts and missing all six 3-point shots – two of them airballs.

Senior Ricky Wright, the Wildcats' second-leading scorer last season at 13.7 points a game, went scoreless and had just one shot in the first half. He played just 11 minutes because of three personal fouls.

His fourth foul, less than two minutes into the second half, sent Wright to the bench. He fouled out with 11½ minutes remaining.

Villanova did not make a 3-pointer until Ray hit two consecutive in the last two minutes. 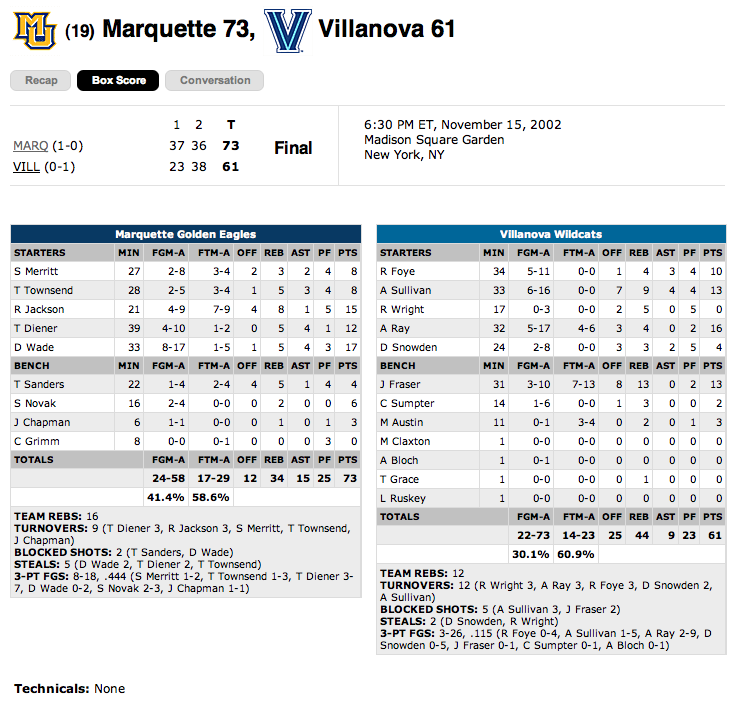