Marquette Now Has Means To The Madness 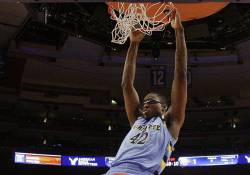 If Tuesday night's win over Providence indeed got the Marquette Golden Eagles into the NCAA Tournament, then Wednesday night's performance legitimized them.

Led by Junior Cadougan, of all people, 11th-seeded MU rallied from a 10-point, second-half deficit to upend the sixth-seeded West Virginia Mountaineers, 67-61, in a second-round Big East tournament matchup at Madison Square Garden.

Cadougan, a sophomore point guard, scored 13 of his team- and career-high 15 points in the second half to spark the Golden Eagles (20-13).

Marquette combined a stifling defensive performance over the final 15 minutes 55 seconds with a couple of huge three-pointers from Darius Johnson-Odom to finally make its sixth straight berth in the NCAAs a foregone conclusion.

“We're in the Big East Tournament,” quipped Jimmy Butler after being asked if, indeed, the Golden Eagles could now breathe easy. “We want to try and win as many games as we can here, and we'll worry about the NCAA Tournament on Sunday, when we wait for Marquette's name to be called.”

The way things were going in the opening minutes of the second half, it appeared as though the Golden Eagles were destined for another disappointing exit from New York.

It was at that point, though, that Cadougan took control. Having been returned to a reserve role the past two games by coach Buzz Williams, the Toronto native scored seven straight points with a pair of drives and three free throws to rally the Golden Eagles.

“I think Junior did a great job tonight,” said Williams. “He played as hard as anybody. I think he controlled the tempo of the game on both ends of the court.”

Five more points from another unlikely hero, freshman center Davante Gardner, then helped them back into the lead at 53-51 with 10:17 left.

West Virginia regained the lead at the free-throw line as MU went cold for a spell, but the Golden Eagles' defense over that span was markedly better than it had been earlier. In fact, it was downright smothering.

After Joe Mazzulla's three at the 15:56 mark, West Virginia managed just one field goal - a Casey Mitchell three - for a span of 14:10. That stand, combined with a pair of dead-on threes by Johnson-Odom on consecutive possessions, got MU out to a 61-55 lead with 3:53 remaining.

West Virginia got to within 64-61 with 31.5 seconds left and actually forced an MU turnover on the inbounds, but it could only manage a couple of rushed, challenged shots that it missed badly. The Golden Eagles finally corralled the ball, and 3 of 4 shooting at the free-throw line by Cadougan and Butler sealed the deal.

“(Johnson-Odom's) shots were big,” Williams said. “But the reason we won the game was because we guarded in the second half.”

The Golden Eagles will now renew acquaintances with the same Louisville team they were beating by 18 with 5:44 left in the second half before “melting down,” as Williams said Wednesday, and losing, 71-70, on Jan. 15.

“We've got a little unfinished business with everybody here from here on out if we want to win,” Butler said. “But definitely Louisville. We've got to prove that if we get a lead again, we can hold it.”

Johnson-Odom finished with 11 points and Gardner 10 as MU beat West Virginia for the second time this season. Kevin Jones had 15 to lead the Mountaineers.

After turning in a smothering defensive performance in the first half in knocking off Providence on Tuesday, MU struggled mightily with West Virginia in the opening 20 minutes.

In fact, as the half wore on the game began to resemble MU's regular-season loss to Seton Hall, in which the Pirates hit 11 first-half three-pointers.

The Mountaineers were actually much more on target, knocking down seven from beyond the arc, a clip of 63.6%.