Yesterday we sat in the staff room in the gym, discussing this year's basketball team. For the most part, I think we were in almost total agreement. However, there were certain points on which we differed, and maybe I would do well to elaborate on them.

Basically, I think that you, assistant coach Bill Knapton and I agreed that the technical side of the game was just about as good as you'll find anywhere. We agreed, too, that there were a number of contributing factors which made this team a loser instead of a winner. Among these we listed “lack of bench strength, lack of material capable of effectively employing the fast break, off nights, McCoy's injuries, Moran's injury and a number of incidentals.”

But, as I said, I felt there was one big factor which seemed to me much more important than any of the others. I referred to it as “attitude.”

What I meant was this. The entire team was not, at any one time, wholly on your side. As a unit, they did not have confidence in what you were doing. They had no respect for your opinions, your judgements or your overall coaching ability. I don't think, though, that it was a case of dislike for you, personally. It was rather a case of player-coach friction.

As far as many of the team members were concerned, you weren't the coach. You were just an observer throwing out a few ideas- ideas which they could take or leave as they saw fit. And, from the way they played this year, they saw fit to leave them most of the time.

Contrary to this idea, I've always though that you and Bill were hired to coach the basketball team. Evidently, I am not in agreement with the team on this point. Each and every one of them was a coach, fully qualified to take charge of any situation. If they wanted to use your ideas, they would. If not, they'd think of better ones.

Before the season started, rumbling was noticeable, but it existed among only two or three. But it didn't stop, as I thought it would. Instead, it spread among the other members. The tension of a poor player-coach relationship became very evident, and the players began talking, not only among themselves. this tension grew with every practice session and every game.

Soon it was no longer limited to player-coach dissension. It spread to a bad player-player relationship, to the extent that some were not on good speaking terms for part of the season. Then it came to be an out-and-out case of “me for me, and to hell with the rest of them.”

As I told you yesterday, I was often tempted to say something about this to you. But I kept thinking that somewhere, someone would find the solution, and soon everything would be smoothed over. But I was wrong.

I realized this as I watched the Notre Dame game here in the Arena, the night we lost by 20, 76-56. No spark, no hustle, no fight. Just plain no attitude, or as you would have it, “no guts.”

Basketball, like any other sport, must be played from “way deep down” if it is to be played well. It wasn't that way in a lot of games this year. On many occasions, your boys didn't even look like they were trying to dig deep down.

For the sake of clarification, I'd like to re-state what I said yesterday. This isn't a bitter gripe on my part. It isn't based on hearsay, either. Much of it stems from personal observation and from conversations with team members. The remainder has been supplied by trustworthy friends who have talked with members of your 1956-57 squad.

Whether or not you want to believe this information is your perogative. I am convinced that what I have said is true. I don't know how you could document it, though. You couldn't ask the members of the team. Surely they wouldn't admit it to your face. They never have. 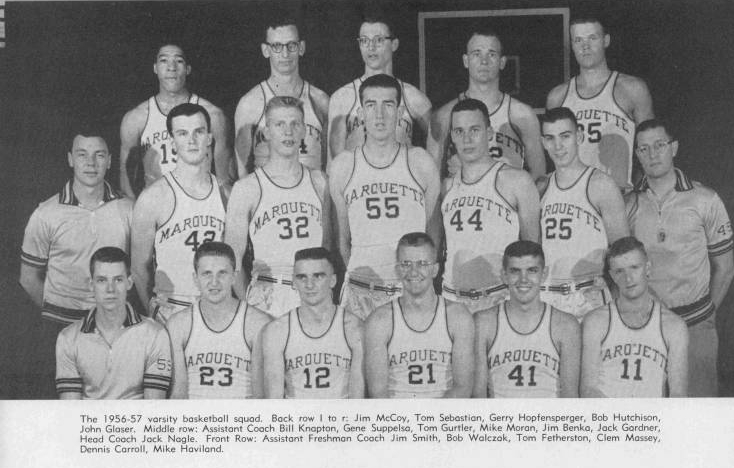