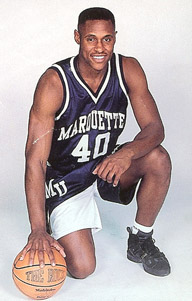 Faisal attended Kecoughton High School in Hampton, Virginia, where he was coached by Bevis (yes, that's really his name) Conrad. After Kecoughton, Abraham went to Maine Central Prep in Pittsfield, Maine. While there, he averaged 18.6 points and 14.3 rebounds during the 1992-93 season. He also averaged 5.7 blocked shots and 3.1 steals that year. He was named his team's Most Valuable Performer and picked up best rebounder, best field goal percentage and most athletic awards. Faisal also captained the 1992-93 team, which was coached by Max Good.

Has played in 29 games and made 27 starts. He led Marquette in rebounding for the year (6.5 rpg) … Has led Marquette in rebounding a team high 14 times … Has blocked a shot in 26 games … Scored a season-best 13 points on 6-7 shooting against Louisville (Feb. 20) … Tied a career high with 12 rebounds at UNC Charlotte (Feb. 15) … Tied a career high with six blocks against La Salle (Dec. 22) … Entered the Cincinnati game (March 7) shooting 37.6% from the free throw line and was 8-11 from the charity stripe in that win … Had five rebounds and one block in C-USA Championship win over UNC Charlotte (March 8). Played on a People-to-People All-Star team that played nine games in Spain in August, 1996 … Averaged 15 points and 10 rebounds on that tour. 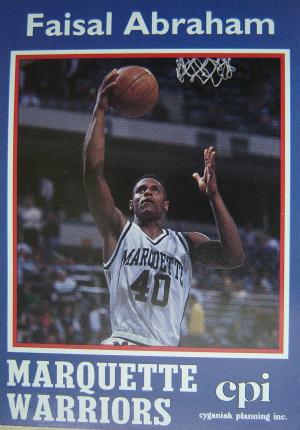 A starter in seven games … His 58 blocked shots were seventh best in school history … Tied for second place among Conference USA players with a 1.9 blocks average … Was the team's leading scorer in two games and top rebounder five times … Had five double-figure scoring games and three double-figure rebounding outings … Grabbed six rebounds against Arkansas (3/16) in second-round action of the NCAA Tournament … Had five rebounds and blocked four shots against Cincinnati (3/9) … Grabbed seven rebounds in win over UNC Charlotte (2/22) … Had six points, 10 rebounds and three blocks in win at Creighton (2/14) … Pulled down nine rebounds and blocked three shots against UAB (1/30) … Had a career-high 12 rebounds, including seven offensive boards, and five blocks versus Iowa State (1/10) … Came off the bench to register team highs of 14 points, seven rebounds and six blocks at Wisconsin (12/ 31) … Those points and blocks were career highs … Chosen to the First Bank Classic All-Tournament Team … Had eight rebounds and two blocks in win over UW-Green Bay (12/2) … Recorded his first double-double of the season with 12 points and 10 rebounds against Columbia (12/1) … Was limited to 15 minutes against UW-Milwaukee (11/26) because of a sprained right ankle … Blocked four shots in that limited time.

Coach Kevin O'Neill on Abraham- “Faisal, as people will know when they see him, is an excellent athlete. He's a very talented young man, who needs to improve his skills. He has a lot of room for improvement. He's a guy we will be counting on an awful lot in the next four years.”

Appeared in 28 games off the bench for Marquette … Saw action in the last 15 contests of the season … Played a season-high 14 minutes versus Texas Southern (Dec. 3) in the First Bank Classic … Scored four points five times - the latest versus San Francisco on Feb. 28 … Pulled down six rebounds in win over West Virginia (Feb. 5). 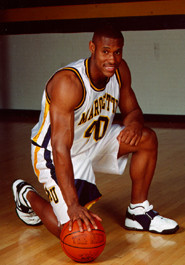 Son of Ralph and Harriet Abraham … Born on Sept. 7, 1974 … His father played at St. John's (N.Y.) … Ralph Abraham was a member of the St. John's team that lost to Marquette in the 1970 NIT finals … He scored four points and grabbed 10 rebounds in the NIT championship game … Younger sister, Tajama, is a member of the George Washington basketball team … Majors in broadcast and electronic communication …