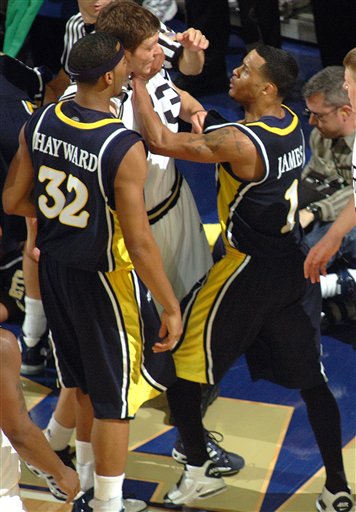 Luke Harangody got Notre Dame (No. 23 ESPN/USA Today) back into the game, then knocked 16th-ranked Marquette out of it. Harangody scored 10 of his career-high 22 points during a two-minute span in the first half as Notre Dame fought back from 13 points down, then scored eight more during a three-minute in the second half en route to an 85-73 victory on Saturday.

Notre Dame coach Mike Brey said he could see by Harangody's body language that he was ready, so he started calling more plays for him. “He had that look in his eye which scares the heck out of most normal people. It's not a normal look,” Brey said. “But I'm glad it's on my team. So you want to keep throwing it in there and getting him touches.”

Notre Dame point guard Tory Jackson said he knew he had to get the ball to Harangody. “He did a great job of getting me some assists. Throwing it down to him, that's an easy assist every time. You know he's going to get fouled or he's going to score it,” Jackson said. Harangody spun around some Marquette defenders several times and put up a few off-balance shots. “I threw up a couple of lucky ones, probably, and I was kind of feeling it there for a second,” he said.

Marquette guard Dominic James said Harangody was the difference. “I thought that was one of the key points to our loss. He did a great job. He gained a lot of confidence after each bucket he made. We probably weren't as physical with him as we needed to be.” Harangody, who also matched his career high with 13 rebounds, was 8 of 9 from the free-throw line and Jackson, who also had a career high 21, was 8 of 11 as Notre Dame was 27 of 35 from the free-throw line. Marquette was 18 of 25.

The Irish (22-6, 10-5), who finished the season unbeaten at home and beat a ranked team for the fourth time this season, can clinch a bye in the first round of the Big East tournament with a win at Rutgers on March 3. The Golden Eagles (22-8, 9-6) have lost four of their last five. “We want to go home and shore things up,” Marquette coach Tom Crean said. “We need to work on our defense. We had to zone a lot more than we would have wanted, and that was certainly just to keep people in the game.”

Wesley Matthews led Marquette with 17 points before fouling out with 5 minutes left. Jerel McNeal added 16 points and Dominic James had 14 points on 6-of-20 shooting. Both had four fouls at the end of the game, as did Lazar Hayward. David Cubillan added 10 points for Marquette, which shot 36 percent. Colin Falls added 14 points for the Irish, including four 3-pointers. Russell Carter added 13 points and eight rebounds.

Though it was just the second home sellout for Notre Dame, the Marquette fans ringing the top of the arena were louder than the Irish fans early. The game ended, though, with the Notre Dame student section chanting, “This is our house.” Brey praised the crowd. “Our crowd getting into it when we gave them a little bit to cheer for helped us close the gap and be up six,” he said. “I think our crowd's pretty darn competitive, just like we are.” 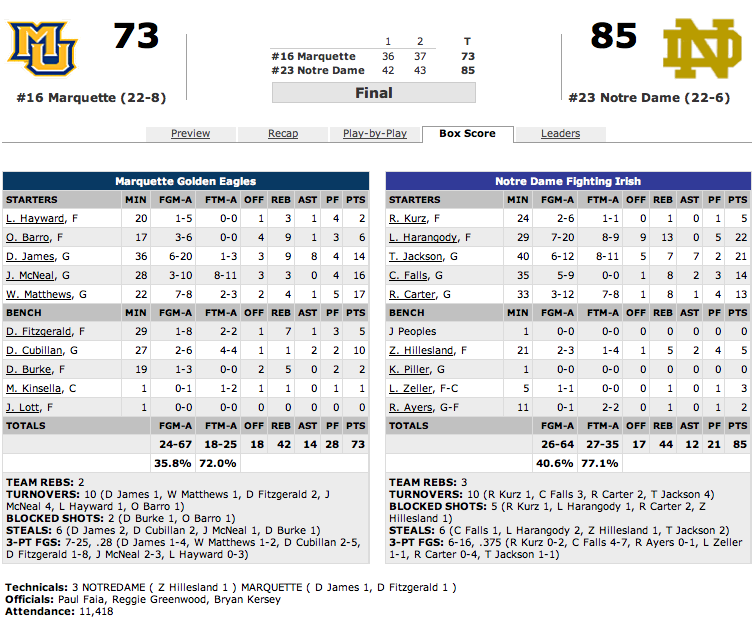