When Coach Jack Nagle's basketball squad opened the 1955-56 season with four straight victories, Marquette fans had visions of a repeat performance - a record comparable to the previous season's fabulous 24-3 performance. But with the toughest schedule ever attempted by a Marquette team, these dreams never materialized.

During the season, they faced three of the nation's six top teams - San Francisco (1), Alabama (5) and Louisville (6). Marquette's basketball team also did its bit for international relations and hosted a barnstorming quintet from the University of Paris.

The Warriors slid into the National Invitational tournament with a disappointing 13-10 slate and ended the year with a 96-78 opening round loss to Seton Hall.

A lack of clutch plays and the inability to cash in on breaks was a reason for the Warriors' decline from the heights. They lost seven games by eight points or less, blowing early leads every time. They barely edged their opponents in almost half of their victories.

At other times, the team performed brilliantly, holding the top-ranked NCAA Champion San Francisco (which extended its winning streak to 55 games) to a slim seven point margin; trouncing the 1955 NIT Champion Duquesne Dukes by 24, battled to the wire with two conference champions in the Sugar Bowl tourney, Utah of the Skyline Eight and Alabama of the Southeast; and downing Michigan State in overtime at the Arena.

The Warriors cooled off as the season progressed, hitting seven of their 11 losses in their last 10 games. Although they were a hustling, talented team, they were also erratic.

Coach Nagle shuffled a mixture of veterans and sophomores around center Terry Rand in trying to find a potent combination. Jerry Hopfensperger, Don Bugalski and Bob Walczak were mixed with newcomers John Glaser, Jay Schauer, Al Avant and Clem Massey in the attempts. Bugalski and Rand were the only two graduates in the group, but the loss of the 6'9-inch center is a big one in more ways than one.

Rand was the brightest spot in the hazy picture of the 1955-56 season. He averaged 20.3 points per game and led the team in almost every other department in his final year of varsity competition. The Law school freshman shattered several of Russ Wittberger's marks by scoring 486 points and 177 field goals, raising his career points total to 1,309. His 43-point outburst against Detroit set another record.

Rand set a total of eight scoring records at Marquette. In his last game in an MU uniform, he scored 29 points against Seton Hall in Madison Square Garden- a fitting personal close to a fine career. 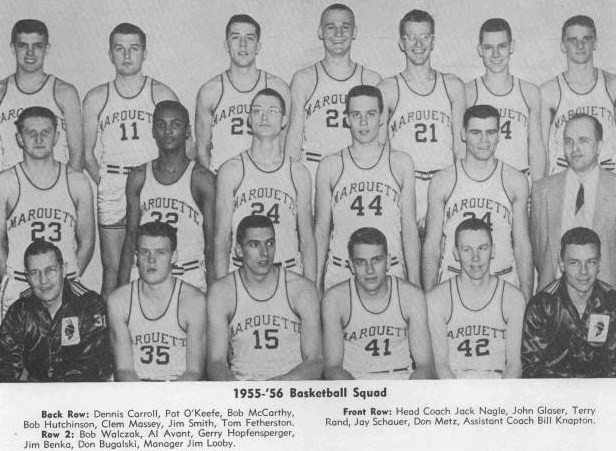