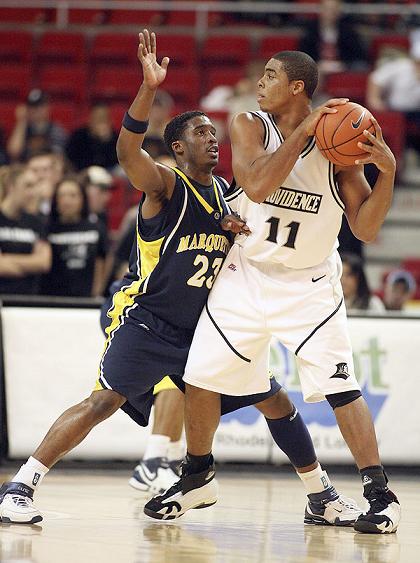 PROVIDENCE (AP) – Herbert Hill had 23 points, nine rebounds and seven blocked shots to lead Providence to a 74-59 victory over No. 15 Marquette on Thursday night in the Big East opener for both teams.

Geoff McDermott had 11 points, 11 assists and nine rebounds, and Weyinmi Efejuku had 18 points and 10 boards for Providence (11-3). The Friars played without guard Sharaud Curry, the team leader in points and assists per game, who missed his third consecutive game for violating team rules.

Wesley Matthews scored 14 points on 6-for-18 shooting for Marquette (13-3), which was without No. 2 scorer Jerel McNeal, who was injured when he banged heads with Matthews in practice on Monday. Dominic James scored 12 points on 3-for-11 shooting – going just 1-for-8 from 3-point range – for the Golden Eagles, who shot 31.1 percent from the field.

Marquette fell behind by 12 points in the first half and were down nine at halftime, but got within 39-34 with 17 minutes left.

But Providence scored 17 of the next 24 points and led by 15 with 9:39 to play as the Golden Eagles tried to come back with 3-pointers but missed often. They were 4-for-23 from beyond the arc in all.

Providence, which opened its conference schedule at home for the first time since 2000, improved to 2-1 against ranked teams this year. The Friars beat Boston College and lost to Florida.