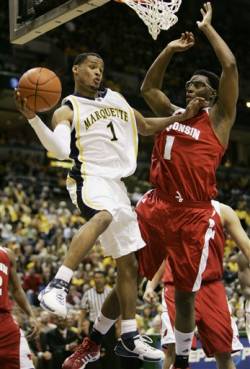 Sure, Alando Tucker's performance in a high-stakes game against an in-state rival might have been one of the finest of his college career. But before proclaiming it among the best he's ever seen from his senior star, Badgers coach Bo Ryan would like to see more.

“I'll wait 'til the end of the year to give you that one,” Ryan said. Tucker scored a season-high 28 points, helping No. 11 Wisconsin stave off a late rally to beat No. 17 Marquette 70-66 on Saturday.

It was Tucker's fifth and – barring an NCAA tournament matchup – final game against Marquette, and he made it count. “He was on,” Golden Eagles guard Wesley Matthews said. “He was feeling it, and he had his way.” It seemed like every time Marquette tried to make a run, Wisconsin turned to Tucker. The Badgers led by 10 points with 3:55 remaining, but Jerel McNeal cut the lead to four with a steal and slam dunk. Tucker answered with a baseline move for a layup that put Wisconsin ahead 64-58 with 1:21 remaining.

Tucker, a fifth-year senior who played against Marquette before taking a medical redshirt in 2003-04, said he wanted to stay aggressive instead of trying to hold the ball and run out the clock. “I was attacking the basket and was able to find some openings and finish,” Tucker said.

The Badgers then fouled Dominic James on a 3-point attempt, but the Golden Eagles star guard hit only one free throw. Tucker made a driving layup on the other end to put Wisconsin ahead 66-59 with 57 seconds remaining. “That's what we want to do, keep feeding the hot hand,” Badgers guard Kammron Taylor said. “Tucker was hot, and he carried us.”

McNeal made a layup with 51 seconds left, but Michael Flowers of the Badgers hit two free throws. James hit a 3-pointer at the buzzer to make it 70-66. The stakes were bigger than usual in what has become a heated annual rivalry, with both teams being ranked for only the third time in 112 meetings. But the result was familiar. With the loss, Marquette coach Tom Crean dropped to 2-6 against Wisconsin, which leads the all-time series 62-51.

“If it wasn't such a big deal, it wouldn't hurt so much,” Crean said. Crean wasn't pleased with the way his team played defense, especially on the perimeter. “We have to really get better there,” Crean said before turning to Tucker.

“It's hard to guard him. He made big plays.” The game was expected to be a matchup of the Badgers' interior size against Marquette's quick three-guard offense. But it turned out to be a grinding defensive battle filled with turnovers and offensive fouls. Wisconsin committed a season-high 22 turnovers, but made up for it with defense. With Flowers shadowing him for most of the first half, James was held to only two points on 1-for-8 shooting.

James found his shooting touch in the second half and finished with 19 points to lead the Golden Eagles. “I didn't have a lot of easy shots,” James said. “The shots I took, I thought I could make.”

Ryan praised Flowers but said he had plenty of help. “If you don't have that kind of effort, you're not going to stop a team like Marquette,” Ryan said. Marquette shot only 39 percent from the field, including 3-for-18 from 3-point range. “I'm not going to tell them to stop shooting,” Crean said, tersely.

“They made it tough for us to make shots.” Marquette was 9-for-14 from 3-point range in its victory over Delaware State on Tuesday. The Badgers led 28-25 at halftime, but they opened the second half with a 7-2 run and eventually built a 10-point lead on an inside move by Kammron Taylor.

Marquette rallied within six, but Tucker answered with a driving dunk to put Wisconsin ahead 43-35 with 11:26 remaining. Marquette rallied within seven points on a layup and free throw by James with 9:26 remaining, but Tucker answered with a dunk and Marcus Landry came up with blocks on consecutive possessions for the Badgers. Landry had 11 points and career-high four blocks. “I guess the adrenaline was just flowing,” Landry said.

“I try to do this every game. I don't know. I am just in the game, and I am in there to help my team do what it takes.” Taylor finished with 13 points. Crean fretted about foul trouble going into Saturday's game, consistently emphasizing the Badgers' ability to get to the free throw line in the days leading up to the game.

Both ended up shooting 18 free throws in the game, but Marquette was hurt when Ousmane Barro was called for his fourth foul after throwing an elbow on a rebound attempt only 2:14 into the second half, and McNeal earned his fourth foul at the 12:59 mark.