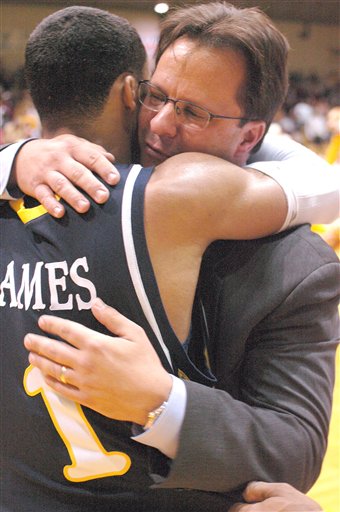 VALPARAISO, Ind. (AP) – Dominic James is making a habit of taking over late in the game for Marquette. James scored Marquette's final 18 points, including a pair of 3-pointers in the final minute – one with 3 seconds left – to allow the Golden Eagles to escape with a 65-62 victory and keep the Crusaders from capturing their biggest victory since Bryce Drew hit the game-winning shot against Mississippi en route to advancing to the round of 16 in the NCAA tournament in 1998. After Valparaiso's Brandon McPherson tied the game at 59 on a 3-pointer with 21 seconds left, Marquette (7-0) called timeout with 13 seconds left. Marquette coach Tom Crean called two plays, both of which called for James to try to get the shot. “Pretty much in those situations if we don't want him to take the ball then I should take him out. Because he's going to shoot the ball,” Crean said. Valparaiso (3-2) knew that. It simply couldn't stop him. “We changed defenses again and were trying to get James with two people on him. He hit a deep shot. He earned that shot. What I was hoping he would to is try to make him make a pass and we were ready to gamble if he did that,” said Valparaiso coach Homer Drew, father of Bryce Drew. James then hit the game-winner from the top of the key to finish with 22 points. “He got a great shot off,” Crean said. “I'll never forget it. I had a great line where I was kneeling. He stepped up and made a great play. That's what great players do to become outstanding players. He's moving and he's on his way.” James also scored 10 points in a span of less than 2 1/2 minutes in Marquette's victory over Duke on Nov. 21. This game James struggled early on. He played only 10 minutes in the first half after picking up two fouls, missing both his shots from the field and going 2 of 3 from the free-throw line. He found himself sitting on the bench again midway through the second half after missing his first four shots from the field in the second half, again making a pair of free throws. “I looked at the coach, like 'Hey coach, I'm ready.' He knew,” James said. James was ready. Moments after re-entering the game he had a steal and then made a pair of free throws to start his 18-point streak. James said he wasn't worried about the slow start. “When the time comes I'm going to try to make the plays. They always say great players make big plays. That's not what I was think. I was just letting the game come to me,” he said. Valparaiso had one last chance, but a 35-footer at the buzzer from McPherson bounced off the left side of the rim. Valparaiso (3-2) has lost 17 straight games to ranked teams since the 1998 NCAA tournament. Wesley Matthews added 11 points and Jerel McNeal had 10 for Marquette. Shawn Huff, who was 3 of 4 from 3-point range in the second half, led Valparaiso with 22 and Jarryd Loyd added 11 as Valparaiso, which shot 33.3 percent in the first half, shot 61 percent in the second half to nearly pull of the biggest upset since Bryce Drew hit a 3-pointer as time expired to give Valparaiso a 70-69 upset over Mississippi in the first round of the NCAA tournament in 1998. Valparaiso, will get two more shots this week to end its losing streak to ranked teams. It hosts No. 19 Butler on Wednesday then travels to play at No. 4 Ohio State on Saturday.