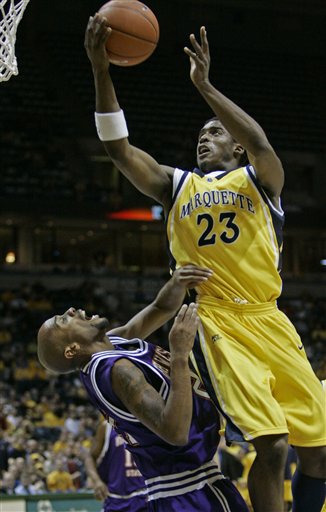 MILWAUKEE (AP) – Ousmane Barro had a career-high 21 points and tied a personal best with 13 rebounds to help No. 8 Marquette beat Northwestern State 83-67 in the Blue & Gold Classic on Friday night. Dominic James scored 13 of his 19 points in the second half and Wes Matthews finished with 14 points for Marquette (8-0), which will play North Dakota State in the championship game of the four-team tournament on Saturday. Barro also blocked three shots. Colby Bargeman led Northwestern State (4-3) with 17 points and Trey Gilder added 13. The Golden Eagles opened the second half with a 14-0 run. Jerel McNeal had six of his 13 points during the surge, including a layup that gave Marquette a 50-32 lead with 16:46 to go. The Demons pulled within eight three times in the second half, the last coming on a Bargeman basket that made it 64-56. James responded with a three-point play with 6 minutes left. Northwestern State never challenged after that. Marquette scored 17 of the first 22 points but Luke Rogers scored six straight points to ignite an 18-5 run for Northwestern State. Gilder connected on a 3-pointer to put the Demons ahead 23-22. Gilder also banked in a shot with 4 seconds left in the first half, cutting Marquette's lead to 36-32 at halftime. Marquette is 8-0 for the third time in coach Tom Crean's tenure. Their best start under Crean was 10-0 in 2001-02. The Golden Eagles were upset 71-64 by Winthrop in last year's championship game, snapping Marquette's 13-0 run in Blue & Gold Classic play under Crean. Marquette allowed 22 offensive rebounds and lost for the first time in the tournament since a 67-51 loss to Tulsa on Dec. 5, 1998.