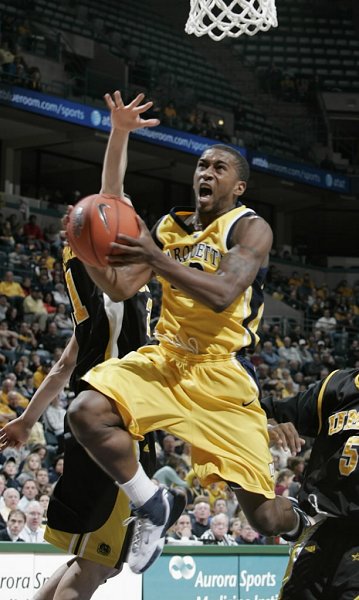 MILWAUKEE (AP) – Marquette coach Tom Crean thinks his Golden Eagles are on the verge of playing some great basketball. “The first half was one of our best defensive efforts of the entire year. I think our offense has continued to improve,” Crean said Saturday after No. 20 Marquette beat Maryland-Baltimore County 68-46. “I think we're on the cusp of playing really good basketball.” The Golden Eagles (10-2) dominated the Retrievers (4-7) one week after a bitter 70-66 loss to their instate rival, No. 7 Wisconsin. Dominic James, who led Marquette with 17 points and six assists, said the win was a team victory. “We just got back to basics. We have to play together and have to be unselfish,” the sophomore guard said. Jerel McNeal had 15 points and Lazar Hayward added 13 for the Golden Eagles, who came out hard in an effort to wipe away the loss to Wisconsin. “First half, they came out fired up,” Maryland-Baltimore County coach Randy Monroe said. “They made a big run and we didn't know how to respond.” Thomas Young scored 17 points and Chris Pugh added 15 for the Retrievers, who lost their second straight game and fourth in their last five. They dropped to 0-13 all-time against Big East opponents. James scored 12 points and McNeal had 10 as the Golden Eagles took a 36-14 halftime lead. The Retrievers were unable to make a dent in that deficit over the final 20 minutes and never got closer than 48-37 on a 3-pointer by Pugh. A basket by James off an alley-oop pass from McNeal and two free throws by Ousmane Barro gave the Golden Eagles a quick 4-0 lead they never relinquished. Maryland-Baltimore County pulled within 6-4 on a basket by Matt Spadafora, but Marquette went on an 11-2 run that ended on a basket by Wesley Matthews. The Golden Eagles had a 10-0 run later in the first half to push the lead to 27-8. McNeal had two free throws to end that spurt. The dominant player in the early going was James. “He's definitely one of the best guards in the country. I give him his respect,” said Pugh, who had to guard him. The Retrievers had to play without their two leading scorers – Brian Hodges (13.9) and Jay Greene (11.0). Hodges was assessed a technical foul in their last game, a 71-52 loss to George Washington. A team rule requires a player with a technical to sit out the next game. Greene tried to warm up Saturday but could not because of knee ligament damage. “I looked at it as an opportunity for the other youngsters on the team who don't get significant minutes a chance to play,” Monroe said of the players' absence. The only part of their game where the Golden Eagles struggled was free throw shooting as they finished 6-of-18. Crean said it has been a problem this season but the players are working hard to fix it. “The only thing we could do more to get better at that would be to bring pillows and blankets here and spend the night,” he said. “I don't think we'll be using that game ball any more.”