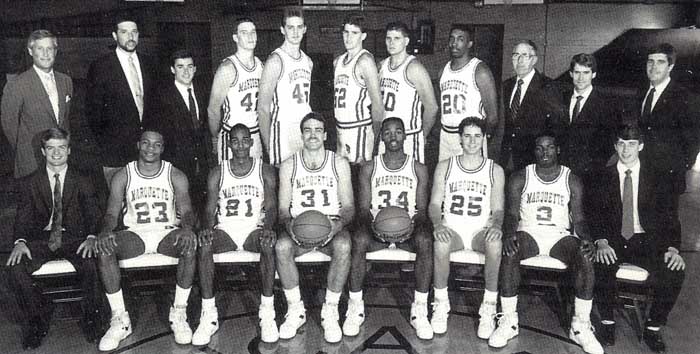 The Young and the Experienced!! No, ,it's not the latest daytime drama and it's not a contradiction in terms. It's the 1988-89 Marquette Warrior basketball team. The Warrior roster includes nine players who are freshmen or sophomores and one other who is also a newcomer- that's young!

So how can Marquette call them “experienced?” Well, at the end of last season, seven of the ten players on the roster were freshmen who had all seen playing time. Each of the six scholarship freshmen started at one time or another during the season. However, the Warriors also add three necomers to the team, including Gerald Posey who sat out last season under Proposition 48.

The Warriors moved across the street, into the brand-new Bradley Center, a $71 million gift from Mr. & Mrs. Lloyd Pettit, in memory of Mrs. Pettit's father, Harry Lynde Pettit.

In their last season as independents, the Marquette Warriors face many traditional rivals, some Midwestern Collegiate Conference opponents and a few new teams. “As a coach, the toughest schedule is always your schedule,” said coach Bob Dukiet. “This schedule presents a challenge and we have to get ourselves ready for a demanding season. We're pleased to have Oregon State on the schedule. In his last year, Ralph Miller is one of the coaching greats,” continued Dukiet. “We have some tough road games- an ACC visit to Wake Forest, Olympian Bimbo Coles of Virginia Tech and we open the season on the road in the Investor's Classic Tournament at Virginia.”

The Warriors play seven games against teams that participated in post-season competition, two teams from the Big Ten and four MCC opponents. “Being that we are competing as a member of the MCC next year (1989-90), this was a very difficult year for scheduling,” said Bill Cords, Director of Athletics at Marquette. Cord's statement is based on the fact that the 1989-90 schedule will include 14 conference games, home-and-home series' with Notre Dame, UW-Madison, and DePaul, and the First Bank Classic. The Warriors can only play 27 regular season games next year (instead of the usual 28), the conference tournament counts as one game.

“The Warriors need to play 17 home games for budgetary reasons,” continued Cords, “and we had to schedule some home games which will not be returned. We tried to avoid scheduling games that had to be returned in order to give us some flexibility in future scheduling.” Next year, MU will play seven conference games, the two games of the First Bank Classic and home-and-homes with Notre Dame, DePaul and UW-Madison for a total of 12 games. On the road, MU will have seven conference games and the home-and-homes with Notre Dame, DePaul, and UW-Madison. At that point, 22 games are spoken for with six games left to schedule, including the exhibition game.

The 1988-89 season was a roller-coaster ride of sorts for the Warriors, who found themselves fighting to keep above the .500 mark for nearly the entire season.

Trevor Powell led the Warriors in scoring (15.1 points per game) and rebounding (6.3 per game). Powell's rebounding was not bolstered by his teammates, as the Warriors pulled down just 31.3 boards per game, the lowest average in school history. Tony Smith was selected the Most Valuable Player and finished second on the team in scoring with 14.2 points per game, and first in assists (158). Michael Flory, the lone senior, finished third on the team in scoring with 12.5 points and second in rebounding (154), after coming back from injuries suffered in a car accident in May of 1988. Sophomore guard Mark Anglavar led the Warriors with 53-99 (53.5 percent) three-point shooting for the year.

Charles Luter suffered a season-ending knee injury on October 15th, the team's first official day of practice. Gerald Posey, the highly regarded high school recruit from New Jersey, had a disagreement with Coach Bob Dukiet before the St. Thomas game and stormed off the court during warmups. He eventually transfered to Trenton State College in January. Corey Floyd, a top 50 recruit from Linden, NJ and transfer hopeful Shawn Kelly were denied admission to Marquette after they had signed letters of intent to attend.

For all the struggles Marquette had throughout the season, they still managed to shoot 52.1% from the floor and 45.3% from the three-point line on the season. Both marks still stand as team records, but they weren't enough to save Bob Dukiet's job.

On March 16th the university decided to offer Coach Bob Dukiet another position in the athletic department for the remaining three years of his contract. Dukiet, as expected, decided not to take the assistant to the athletic director job created for him, and settled the contract's money matters with Marquette.